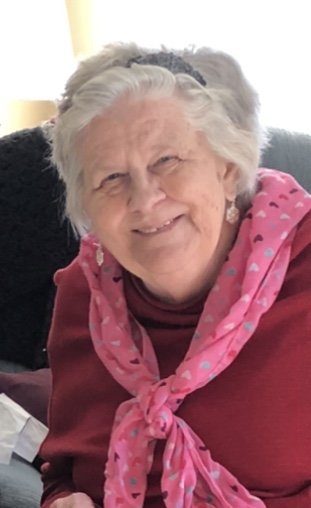 Edith was born in Bridgeport, CT but raised in Waterbury, CT along with her twin sister Arlene Pasqualicchio. Both girls went on to earn nursing degrees and Edith was an RN Nurse at Newport Hospital, Newport, RI. While studying in Newport Edith met her husband George on Sept 5, 1953 at a beach party. On Sept 14, 1953 he asked her to go to the movies and a Gala Ball the following weekend. October 31, 1953 George, who was big into Morse code wrote her a note in code on an index card that said, “Eddy, you are the loveliest girl in the world”. She kept that note to this day. They were truly a match made in heaven. They married on June 15, 1957 moved to Florham Park, NJ and eventually down to Colts Neck, NJ where they raised their 3 sons, George Jr., Tim and Pete.  Edith taught her boys how to live and love and spent lots of time taking them to their fishing spot, basketball, and to see friends. She was always ready and never said no, she just stopped and did for them. Once the boys were grown up and married, she and George moved to Whiting, NJ where they spent many happy years traveling, entertaining, loving their children, 6 grandchildren, 1 great granddaughter and serving the Lord.

Edith was an Evangelist, a very strong woman of faith and shared the gospel everywhere she went, even at the airport waiting for luggage. She had a close relationship with the Lord and lived her life serving Him daily. One vivid memory was when Edith’s youngest son Pete got hit by a car and as he lay bleeding waiting for the ambulance she gathered the neighbors who were there and prayed over Pete asking God to deliver him from death. Edith was a very generous person and was always ready for company, inviting church members over for lunch or dinner while her husband was unaware they were coming. She always had enough to feed them since she loved to bake. She did acts of kindness without thinking twice. If someone were new in the neighborhood, she would bring over an apple pie to welcome them or if someone was sick, she was picking flowers from her garden and bringing them or delivering meals. She loved to help people in any way she could.

Edith was always prepared for anything and managed to have whatever anyone needed in her purse. Be it a needle and thread, band-aids, cough drops, a safety pin or something you’d least expect, most of them were in mini zip lock bags in her purse.

She absolutely loved the Lord and her family and as she leaves this world to join George and our heavenly Father, we know we will see her again.

Services are private and under the direction of the Clayton & McGirr Funeral Home, Freehold Township. For information or to leave condolence messages to the family, please visit www.claytonfuneralhome.com

Share Your Memory of
Edith
Upload Your Memory View All Memories
Be the first to upload a memory!