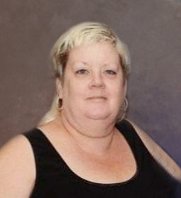 Jeri L. Holden, 60, of the Morganville section of Marlboro passed away suddenly on Monday, June 28, 2021 at Raritan Bay Medical Center, Old Bridge Division.  Jeri was born in South Amboy.  She was raised and had lived in Parlin.  Jeri also had lived in Keansburg, Lawrence Harbor, and Aberdeen before moving to the Morganville section of Marlboro in 2011.  She worked as a supervisor for the Division of Motor Vehicles in Matawan and Freehold for over twenty years until her retirement.  Jeri was a longtime member of the Civil Air Patrol and also sold Avon Beauty Products.  She taught herself how to crochet and had a affection for cats.

Jeri was predeceased by her former husband, John Holden.  She is survived by her boyfriend, Peter Jones of Morganville; her sister, Judith Thompson of Manalapan and her twin sister, Joni Quinones and her husband, David of Lawrence Harbor; nephews, Richard Thompson and his wife, LaChelle of Manalapan and Bryan Thompson and his wife, Morgan of Freehold; niece, April Pastirick and her husband, Jeremy of Lawrence Harbor; grandnephews, Jeremy and Richard Anthony “R.J.”; and grandniece, Amelia.

A visitation will be held at the Clayton & McGirr Funeral Home, 100 Elton-Adelphia Road (Route 254), Freehold Township on Monday, July 5, 2021 from 4:00 to 7:30 PM with her funeral service to be held at 7:30 PM.  Inurnment will be held at Old Tennent Cemetery, Tennent at a date and time to be announced.  For those who desire, memorial contributions in memory of Jeri may be made to, MS Society NJ Metro Chapter, 1480 US Highway 9, Suite 301, Woodbridge, New Jersey 07095.  For information, directions, or condolence messages to the family, visit www.claytonfunerahome.com.