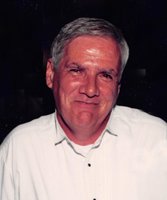 Victor A. Cook, Sr., 77, of Toms River, passed away on February 12, 2020 at Ocean Medical Center, Brick. He was born in Hoboken, raised in Union City, and had lived in Jersey City and Brick before moving to Toms River in 2015. Victor was a truck driver for Teamster Local 807, Union City, retiring in 1997. He was a former parishioner of St. Nicholas Church, Jersey City. Victor was a member and former Exalted Ruler of the Brick Elks, Lodge 2151 and very active in their youth activities. He was known as “Beano Cook” when coaching the Jersey City Police softball team and had a passion for coaching basketball, football, and baseball. Victor was a proud NY Football Giants fan and NY Mets fan and a devoted husband, father and papa. He was predeceased by his wife, Patricia in 2013; and his daughter, Susan Cook in 1993. Victor is survived by his son, Victor A. Cook, Jr. and his wife, Elena of Howell; grandchildren, Melissa Cook and her fiancé, Steven Ambrosino, twins, Susan Golterman and her husband, Tim of Toms River and Kristin Cook and her fiancé, Kevin McCabe of Brick; great grandson, James Matthew Golterman; brother, George Cook and his wife, Janet of Hackensack; sister, Mary Schwartz and her husband, Gill of Dublin, OH; brother-in-law, Fred DiMase and his wife, Jackie of Wood-Ridge; and many nieces and nephews. Visitation will be held at the Clayton & McGirr Funeral Home, 100 Elton-Adelphia Road (Route 524), Freehold Township, on Monday, February 17, 2020 from 2:00 to 6:00 PM. Relatives and friends are invited to gather at the funeral home at 9:00 AM on Tuesday, February 18, 2020 for the procession to his 11:00 AM Funeral Mass at St. Nicholas Church, 122 Ferry Street, Jersey City. Entombment will follow at Holy Cross Cemetery and Mausoleum, 340 Ridge Road, North Arlington. For those who desire, memorial contributions in Victor’s name may be made to the Steven Siller Tunnel to Towers Foundation, 2361 Hylan Boulevard, Staten Island, NY 10306. For information, directions or condolences messages to the family, visit www.claytonfuneralhome.com